Dynamic Start to the day 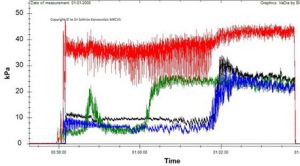 So when is early morning and when is middle of the night? Who knows, but I do know that I never get used to them! Especially when I know I have a marathon day ahead.

Once up, the intensity of the work, the banter, the adrenalin rush in an emergency and, more often than not the great farmer hospitality (while socially distancing), make it all worthwhile. But those first few moments, when the alarm rings….

And so I began my week with a dynamic milk parlour test, just the first job of the day! It meant arriving at 4.45am prepped and ready to go, factoring in the obstacles necessitated by social distancing etc. The idea was that, as the morning milking takes longer and the cows give more milk, it would give the best opportunity to look at various increased stress risks to the plant.

We were also comparing four different types of liners, because on that particular farm there are issues with liner fit. The rubber or silicone ring at the top of the liner may not fit around the teat during milking if the liner is not of the correct size. This can lead to mastitis, if consequent liner slip causes milk to remain stationary at the teat-end, instead of flowing away and in extreme cases be propelled back in through the teat end into the quarter. The other interesting thing is that most herds have a diverse teat size and there are a couple of measurements we have to take to choose the right liner fit, so decreasing the risk of mastitis and teat end damage. It’s so satisfying to reach a good conclusion and to produce a report the next day that will help the farmer and make him more informed, improving performance, animal welfare and of course the bottom line.

The next stop was a Johne’s Eradication Scheme, again carried out under social distancing rules and part of a UK-wide farmer eradication scheme. This disease may become of public concern, as well as debilitating for the cattle involved. I had already updated the farmer with a list of cows that are at risk, following the latest of his regular tests. Johne’s tests are taken sixty days after a TB test, to avoid any interference between these tests. 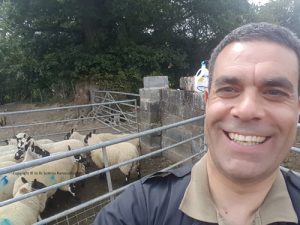 I also did some calf castrations, pretty routine but on this occasion I was trialling a new device that helps me remove testicles with less effort and more painlessly. So that was a learning curve, bringing something different to a routine task. The other variant was that I was called out to castrate one animal and when I arrived there were twelve!

Get those Sheep farm assured

It’s an exciting time to be a sheep farmer, with many challenges ahead. So I always relish helping flockmasters to improve performance and the bottom line.

It meant that my last stop of the day, a Sheep Farm Assurance Plan, brought a welcome lift to the day. We talked about identifying clinical priorities for the next twelve months. Enzootic abortion is an issue for his 500 ewe flock and lameness as a result of scald prompted discussion about foot trimming, bathing and possibly the vaccine.

Another topic is the antibiotic reduction, the oral antibiotic they used to apply at birth is discouraged these days and so we were looking for alternatives. Then came an appraisal of worming, liver fluke and other relatively routine issues.