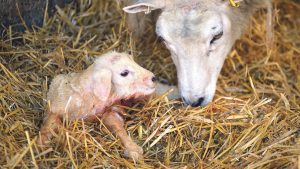 Counting Sheep and not Enough Sleep

The biggest challenge of all at this time of year can be getting enough sleep. February and March are busy months in the farming year and, consequently, for the vet. The work ranges from the more tedious TB testing to the challenges of lambing high value embryo transferred ewes.

A TB test on a very well run, high value, herd involved my getting up at 3.30am in order to be on farm by 5am. I needed to set up early, because we had decided to begin the test with the cows milking – a decision dictated by the collecting yard facility and the need to disrupt the high yielding cows as little as possible.

Factor in the need to socially distance and it took us nine hours! It was a long and rather tedious exercise, but of course very important in that it helps keep control of a very debilitating disease for cattle. Crucially, it can’t be allowed to spread to people.

I found myself dehorning and castrating calves the following day. The meat price is very high and people are preparing stock ready to be moved on from stores to fattening cattle and part of the process is to be sure they are free of their testicles and horns. Both can be a health hazard, especially the horns as they might injure themselves or others.

Then a very, very busy weekend followed. Farmers can generally cope with a difficult calving, but lambing is different, especially when you’re dealing with high value pedigree stock. I probably did 18 lambings at all hours, mostly with the ewe brought to me.

My stress levels were particularly high when it came to a pedigree Texel flock. It was worrying enough lambing the pedigree ewes, some of the finest about. They shot up when it came to the embryo recipient ewes, because each and every lamb is of a very high pedigree and worth a lot of money.

I did six lambings for that particular flock over two days, with four visits. It almost seemed as if each time I finally got back to sleep the phone would ring again! Two were delivered by Caesarean section on the farm.

I would have a phone call at 7am to go out and lamb and then, once I had finished, six hours later there would be another phone call. We all saw the funny side, but it’s relentless and I think the difficulty with being on call in a busy lambing season is getting enough sleep!