The good news is that Mendip Vets has been accepted to join an august group of stakeholders in an international research project. CowefficieNcy is looking at ways of redressing nitrogen inefficiency in dairy cows, including youngstock. The group includes Cornell University in New York, Aberystwyth University, Wales, Palma University, Italy and Thessaly University, Greece as well as private companies such as Wynnstay.

Particularly growing cattle tend to be inefficient in terms of nitrogen, in the sense that they are fed but don’t give anything back. As any farmer will tell you! It takes quite a long time until production begins. Our role will be to look at the diet, to monitor and weigh the dairy cows and youngstock in order to assess their nitrogen use. 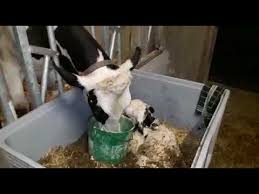 One herd I visited is an Autumn calving block. They had finished serving and wanted to assess how it had gone. We had been focusing on fertility over the 12 months, because this time last year one in three cows didn’t hold: a devastating result.

We did a number of things. We addressed disease, we addressed BVD, we addressed IBR with appropriate procedures like vaccination and sorting animals from good sources. We also addressed trace elements. They were low in a couple of things: Iodine and Selenium and that affected the longevity and survival of calves and also affected cow fertility. I’m pleased to say that we have advised the introduction of these trace elements in the form of a supplement, reduced the issue dramatically and now only one in ten cows is empty.

Going forward, we’re now focused on nutrition. I think there’s too much energy going in and not enough protein. The ration needs to be better balanced and I’m hoping that will bring further improvements in fertility and that the empty rate will fall below 6%.

I’m pleased with the results so far though. I was also very pleased that we pregnancy diagnosed, the 200 animals in 105 minutes. It’s pretty good, a cow every 20 to 30 seconds which is a very good result. It’s not the speed that counts of course, but given that quality is a given it does help! 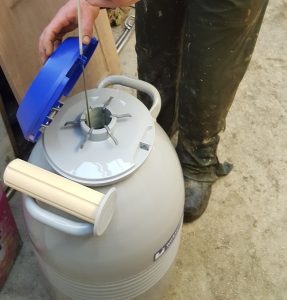 A 1.30am call during the week reinforced for me the need for absolute discipline, forward thinking and organisation on the farm. Once I had shaken off the throes of emerging from a deep sleep!

I had to be quick because the case was a heifer, struggling to calve a particularly big calf. The farmer feared she would need a caesarean. She was already down when I arrived and I feared the worst.

However, we were able to calve her naturally and a fine Aberdeen Angus calf emerged. Over a socially distanced cup of tea afterward, we were admiring the not so little creature and watching the cow recover, I wondered why he had been so very anxious.

It turned out that the farmer wasn’t at all sure that the calf the heifer was carrying was the required Aberdeen Angus. He feared it might have been a Limousin, meant for the bigger, more mature cows. The flask had contained a number of straws, both Aberdeen Angus and Limousin. They were all the same colour and in the stress of a busy day, he had pulled out the straw and later feared he might have misread or not read the bull’s name as the boiling nitrogen misted his vision.

He was right to have been concerned. The calf and the heifer would almost certainly have died if he had used the wrong straw. I realised that it had been a mistake waiting to happen, because the operator has to pick out the straws as the liquid nitrogen begins to boil and that can impede vision. Factor in timing, distractions and the need to maintain a constant temperature in the flask and it’s easy to miss or misread the bull name or breed, especially when you’re sourcing from more than one company. So often these colours aren’t standardised.

The message couldn’t be clearer: Sort Those Straws in Advance.

Another feature of the week was a big TB test. Welsh hospitality meant that the day also delivered an outdoor socially distancing breakfast, as well as lunch. Given that one of the farmers in the partnership is also a chef, they were some memorable meals!