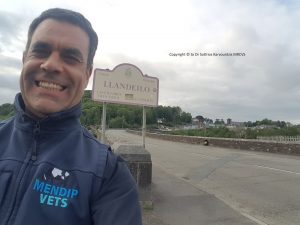 A vet’s life is never dull, even in a wet January. And CoronaVirus restrictions add to the variety of life, forcing me to think ‘outside the box’.

And so it was that the first full week of 2021 involved counting the tails on bull sperm cells, handling sheep while observing CoronaVirus social distance constraints and improvising an operating theatre. I learned during a routine TB test that my Christian name would translate as Chiw Mingh in China and enjoyed a hair raising quad bike ride through the snow. Then there was a keep fit session with some Llandovery White sheep!

A late evening call from a farmer with a Charollais ewe that had been ‘messing about since 8am’ set the tone. I resisted the temptation to ask why it had taken him so long to get help, especially as he had imported her from Ireland.

It was pretty obvious that she hadn’t opened up, ring womb as we call it. And that could have been the result of a number of reasons: genetics, inexperience or stress on the part of the ewe, or due to a pathological condition.

I couldn’t use the purpose build sheep surgical theatre, because of the CoronaVirus social distancing requirements. So, with animal welfare considerations also to the fore, I decided to drop the tailgate of the sheep box and then tied the anaesthetised ewe onto it.

By now it was very late evening and snowy, but all worth the reward of delivering two live lambs. Then, just as the exhilaration and relief was kicking in, all hell broke loose. One of the joys of Charollais lambs is that the minute they hit the deck they’re up and running – not so joyful when this is outside in freezing conditions and attention is on holding down the ewe, while simultaneously trying to catch the lambs. 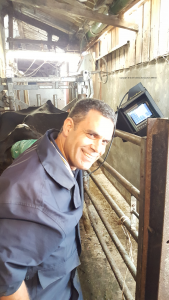 Then next day I set out for a routine TB test on a beef herd, happy that I’d had enough excitement for one week. The farmer is in his seventies and the herd well managed and docile enough, so I wasn’t expecting any surprises, let alone a hair-raising quad bike ride, in the back of the trailer.

The steep and snow-covered farm track meant I had to quickly unload and use my client’s quad. He has no fear and that, if nothing else, triggered an adrenaline release, as I was socially distancing and sat in the trailer!

It turned out that his wife is from South China. I’m well used to being teased that my name, Sotirios, means saviour, Salvador, in Spanish, while Karvountzis is coal trader in my old fatherland, Greece. I wasn’t expecting to hear that in China I might be assumed to come from the Mingh dynasty, with my name translating as Chiw Mingh.

Scanning a small flock of sheep the next day brought further challenges. Llandovery Whites tend to have minds of their own. They’re a Welsh Mountain White crossed to a Cheviot, to produce sheep that thrive on the somewhat harsh terrain. If there is a gap, they’ll jump through it and if there is an obstacle they will jump over it! Combine that with the need for humans to socially distance … 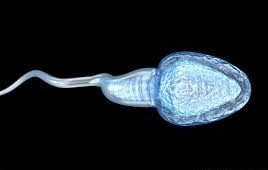 It was a positive outcome though, with the bunch of forty ewes showing a 165% twinning rate, meaning they should produce 70 to 75 lambs. They’re due to lamb from the end of March through to April and I’ll watch with interest.

Test it or lose it

The rest of the week involved PDing numerous herds of dairy cows, castrating 40 ‘energetic’ Stabiliser bullocks and a bull semen examination, the Bull Breeding Soundness Evaluation. It involved a Welsh Black and a dairy herd and again the thinking is underpinned by an old proverb: if you can’t get a cow in calf, try a Welsh Black.

It’s largely about checking that the tails of the sperm are straight, so that they can flip and propel themselves forward to find the egg. It only needs one in around 4-6 billion sperm cells per ml to find and penetrate the egg, but it means they all have to be fit for the challenge.