Preliminary results from an EIP Wales project are indicating that the biggest impact on improving the function of the milking parlour and enhancing udder health, lies with identifying and rectifying overmilking. 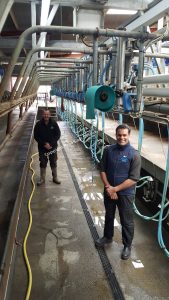 Four dairy farmers in Carmarthenshire with an average herd size of 260 cows have been working closely with Dr Sotirios Karvountzis of Mendip Vets, Llandeilo to investigate the benefits of a dynamic testing routine when working towards improving udder health by reducing bactoscan levels and instances of subclinical and clinical mastitis.

Dynamic testing is carried out by their vet, Dr Karvountzis every two months on each farm. A simple way to describe dynamic testing is to compare the testing of a milking machine with the testing of a car. There are two types of car tests, the MOT and the road test. During the MOT, the vehicle is tested in the garage without passengers or a load in the car. The stress on the vehicle is therefore minimal. The MOT ensures the vehicle complies with the minimum standard required for the vehicle to be roadworthy. A road test might however show hidden problems that exist when the car is put under pressure when driven on real road conditions, or when the car is carrying a load. Dynamic testing is the equivalent of a road test, where we are looking for issues that can damage the cow, which any other type of static milking parlour test would not identify.

Here are some examples of the variables that are monitored through dynamic testing:

It is also important to highlight the difference between dynamic testing and normal maintenance undertaken by manufacturers/farmers.

“A static test does not test if the Automatic Cluster Removal (ACR) is not timed correctly. Furthermore, although some parlours are now computerised, parlours with increased automation cannot always check if the pulsators are working correctly, for example, hence why the dynamic testing is more suitable for preventing issues with udder health”, says Dr Karvountzis.

Dynamic testing also includes the examination of a sample of cows for any abnormal teat-end configuration such as any signs of hyperkeratosis.

The milking parlour at each of the four farms is being tested with four VaDia recorders which record the vacuum during milking at four points in the milking cluster. The first three are placed in a fixed position on the first, middle and end milk unit throughout the milking, measuring the vacuum levels of the milk liners. The fourth is attached to the pulsation tubes, measuring their vacuum levels for the duration of the milking of one cow. Once that cow finishes milking, the fourth recorder is then moved onto the next milk unit and so on.

“One of the main contributing factors of poorer udder health that has been highlighted from the project to date is overmilking”, says Dr Karvountzis.

Overmilking takes place when the cow has the milking units (and therefore vacuum) on her udder for longer than is required. During overmilking the machine is milking at full vacuum with low or no milk flow. The primary causes for this is when the ACR is set to remove the milk units at too low a milk flow (e.g. 200ml / min), or the delay in pulling the milk units off the udder and cutting the vacuum off the milk liners is set too high (e.g. over 10 sec).

The pre milking preparation of the cow has also been highlighted as an area where dynamic testing has led to resource efficiencies and increased productivity. This is related to the physiology of milk let-down of the cows.

“The cow requires stimulation of the teat by either pre-dipping, fore stripping or cleaning of the teats or the sound of the concentrate feed hitting the feed bins, as they enter the parlour. This stimulation results in oxytocin being released and therefore the milk being let-down. Pre milking preparation and its timing is very important because if timing from teat preparation to unit attachment does not coincide with the milk let-down, there will be a temporary cessation of milk flow which is referred to as bimodal let-down”, says Dr Karvountzis.

“With proper stimulation, unnecessary vacuum application at the teat-end can be avoided and less trauma is caused to the teat ends, improving udder health. Adequate stimulation pre-milking optimises the unit on time and therefore reduces the time taken to milk each cow, leading to resource efficiencies being achieved,” he explains.

Huw Morgan, who farms with his parents, is one of the four farmers taking part in the project.

“I farm at Twyn Farm, Nantgaredig near Carmarthen with my parents. It’s s 93Ha farm with a 160 spring calving flying herd. This is our 8th season of milking as we were a beef and sheep farm before”, explains Huw.

“Our next step is to increase cow numbers up to 200 and improve our facilities. We wanted to take part in the project because we are a low input, low output system so maximising profits from our cows is important and we saw the project as a chance to ‘fine tune’ the system and a good chance to get healthier cows meaning less antibiotic usage which is important to everyone. Healthier udders, healthier milk, healthier cow, healthier bank balance.”

Improving animal health and welfare is key for improving consumer perceptions of the industry and building upon the fact that the UK has some of the highest animal welfare standards in the world. Reducing antibiotic usage associated with udder health not only will significantly reduce on farm costings for veterinary and medicines but it will also reduce the chances of antibiotic resistance developing to important drugs used on farm.