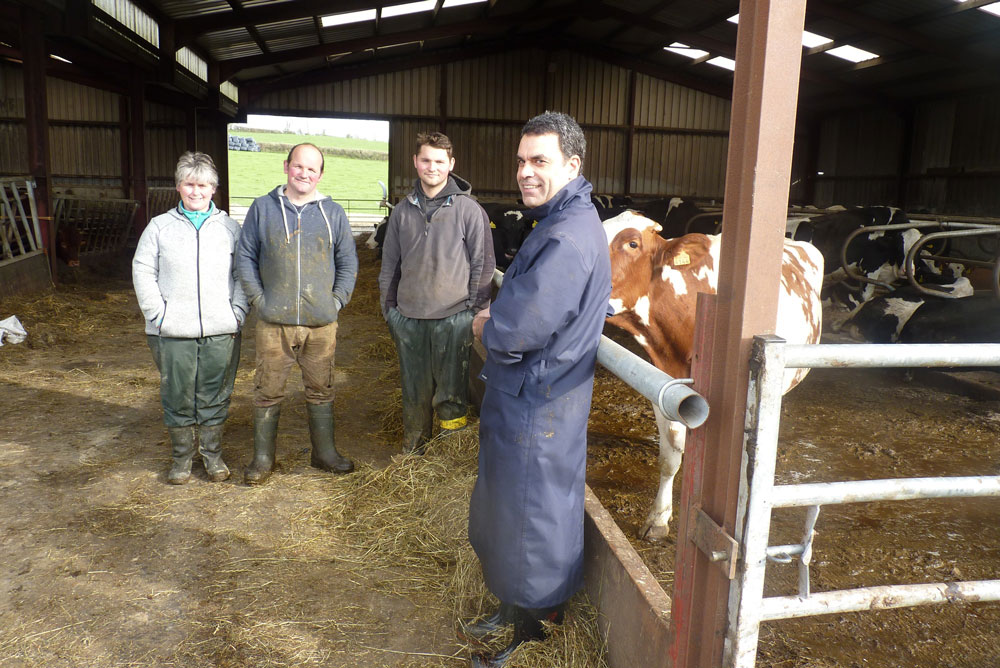 EU vets are not a novelty even in the remotest areas of rural Wales. And multilingualism is embraced in a country that is officially bilingual. A Welsh speaking Greek vet, though, is a talking point.

Sotirios Karvountzis, of Mendip Vets, is involved in mentoring and training dairy farmers across a wide area of Wales and South West England. It means that he spends two or three weeks out of every month in West Wales, working out of the small town of Llandeilo near Carmarthen, an area where as many as 40% of people speak Welsh.

He majors on scrupulous attention to detail and on making his clients feel relaxed and comfortable so that they can focus on his advice. This applies whether he is out on a farm on a routine visit or mastitis investigations, castrating, foot trimming or in a classroom delivering a training session via Farming Connect, the Welsh Government sponsored scheme to improve the skills set of Welsh farmers.

A big part of this approach is the use of language. He steers clear of industry jargon wherever possible when training and, with a distinctively European perspective, aims to speak to clients in their own language.

Sotirios has picked up the everyday Bore da or Good morning, Der yma or Come here, on his rounds. He takes the trouble to ask clients and colleagues to translate and explain little snippets of conversation and, accordingly, is able to make his initial introductions in Welsh wherever possible.

Dairy farmers, Ashley and Meinir Law, with their son Chris and daughter Bethan, milk 120 cows.  She was brought up in a Welsh speaking household and stresses that the vet’s approach is important, particularly for the older farmers in the community.

Meinir says:”He came here the first time and said, Bore da. I was quite surprised as I didn’t expect him to speak Welsh. It’s a hard language to learn, as is any, and I know because I had to learn English when I first went out to work.

“It’s a big thing to learn a new language. He’s making an effort and you have to admire that. Sotirios is working in a Welsh speaking community and most of his clients speak Welsh and so a lot of older farmers appreciate that he makes the effort.

“It’s more than that, though, he’s a good teacher – in the classroom and on the farm. Ashley, my husband, likes to have the same vet coming out. He’s been doing a refresher course in foot trimming with him and our son, Chris, will be doing some training with him in January.”

Sotirios has a straightforward approach. As a European, it’s natural to speak more than one language and to take an interest in the various cultures and languages bubbling up around him. It means there is little of the awkwardness that some first language English speaking people experience.

He says the challenge is just part of the job: “I’ve been learning for a year now. I like to make people feel at ease. I like languages and I think it helps to get the message across, because if people are at ease they are more receptive and so my work is more productive.

“At the moment my tutors are the people I work with. I talk to people in the office and I do get teased a lot. One colleague told me that his postcode was Pen draw’r byd. It took me a while to work out that it translates as ‘Back of beyond’ in English!

“I’m not deterred though and I will be taking structured lessons. I’d like to be able to deliver a specialist course through the medium of Welsh, although that might not be for a few years yet!”

Meanwhile, Sotirios is concentrating on helping to raise the standards of Welsh livestock farming by whatever means is available. And whether on farm or in the classroom, his training is delivered in clear, bite-sized elements. Even when addressing specialists, technical jargon is kept to just 20% of the content.