It might be less than obvious, but the precision and attention to detail required of a helicopter pilot is in some ways similar to that required of a veterinary surgeon. Accordingly, Flying Vet, Dr Sotirios Karvountzis of Mendip Vets, is keen to emphasise that, more precisely, he is a vet who flies. 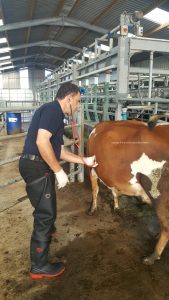 It’s only on the very rarest of occasions that he takes his helicopter on farm. And usually it’s en route to a pre-arranged training session or consultancy, rather than in responding to an emergency – although that has happened – somewhat to the shock of a client!

He says: “I was departing from Bristol for a farmer Cow Signals course, when I got a phone call from a friend and client in West Wales. He had a sick cow.

“I set off from south of Bristol, aiming for a slight diversion from the course venue near Llandeilo. The weather was quite favourable, so I arrived within 35 min at Rheinallt Harries’ farm at Bethlehem.

“The cow was seen and treated. I departed and arrived shortly after at the course venue, without much delay. It pays to allow for any delays in your flight planning…!

“I checked a few days later, I was pleased to hear that the cow was improving”.

For his part Rheinallt Harries, whose cow was a ‘bit off colour’, a flying vet arriving in the field was a little unusual. But then, he has come to expect the above and beyond from Sotirios.

He adds: “I wanted him to bring a stethoscope and put some fluids into her. I knew he would come if he could – but I didn’t expect his helicopter to land in my field!

“But then I have come to expect the unexpected from him – even when it’s way beyond the call of duty!”

All in a day’s work!  While promoting enhanced health care in Wales and the South West of England is very much the day job, Sotirios is hooked on the thrill of flying. He spends about 60 days a year flying, usually from Bristol, and foots the bill for a very expensive hobby by ‘chauffeuring’ clients with enough disposable income to beat the traffic jams.

Sotirios adds: “When I studied veterinary medicine, the cost of studies was free. As a pilot, I am now a qualified commercial helicopter pilot with instrument rating, which allows me to fly in cloud, night, etc. To achieve this, it cost approximately £150,000 (training, type conversion, hour build).”

He loves meeting interesting people, sometimes ferrying high profile clients in and out of Glastonbury. Then there is the countryside and the incredible views afforded from the sky.

Sotirios says:”It’s the travelling and the places you see. The South West of England is beautiful, but what is unbelievable is Wales, because you get the valleys, you get the mountains, you get that mixture of urban, roads and built up areas, then suddenly you’ve got the Brecon Beacons.

“You can see a lot of history from the air, disused railways, mines. You can see follies from the air – there are quite a few in Wales. There is a forest shaped like a horse and you can see all the ports, the seaside, Flatholm with its thousands of rabbits……

“The view that I’ll never ever forget is in the summer. You fly along the Towy Valley and you have a river that meanders like there’s no tomorrow and every third hill has a castle on top and that railway line on one side and road on the other. You’re flying along and suddenly you see the train coming up over the bridges. It’s remarkable.”

As for the high profile guests, Sotirios says he adopts the taxi driver approach and only chats if the client clearly invites conversation. Some A-listers have proved to be among the more friendly, courteous and engaged.

Others, perhaps among those returning from Glastonbury can sometimes be a little less aware of what is going on – and it’s not usually the flying that renders them ‘spaced out’.  Another memorable client hired Sotirios’ services to zig zag along the South Coast of England, seeking inspiration for an unusual shape for a swimming pool he was having built.

Helicopters and on farm veterinary work present dangers, but Sotirios clearly relishes the challenges. Fear is not a factor in a dangerous situation, adrenalin and training kick in. It can be sobering enough to steady. But not to stop.

He explains: “When you are flying, you tend to be so focused on getting out of a situation, that fear is not a factor, your training kicks in. As a commercial pilot I need to submit to a six-monthly test, where during this flight I have to recover the aircraft from various emergencies, including simulated engine failure.

“Scary doesn’t really come into it, only until after you land and your knees begin to shake uncontrollably…”

Thrills and spills apart, the truth is more prosaic. Sotirios enjoys procedures, protocols, precision and he says both flying and veterinary work are similar in that respect. There is also a certain way of dealing with people – although the approach taken with a farmer can be a lot more down to earth! 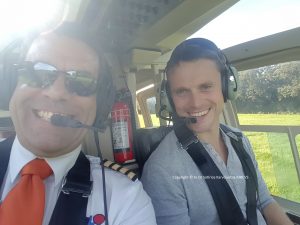 He says: “It’s similar to things we do as a vet. There are emergency protocols for disease, disease prevention protocols or routine procedure protocols. Aviation is very much driven by protocols. A lot of them are health and safety protocols, prevention of accidents and the like.

“Very often farmers ring me up in May, when the silage is coming up or in August when it’s harvest time. They need three or four days of dry weather, so they will often ring me up to confirm that the weather will be favourable.

“The third aspect is that when you’re flying you need obviously to keep your eyes out for any emergencies on board or outside. You need to be able to communicate with the Tower, with your fellow passengers and ultimately find your way from A to B.

Sotirios is aware of the dangers of flying, but as with everything he does he analyses the danger, understands the principles and simply takes off into the wide blue yonder. He has long come to terms with his ‘demons’ and chooses to go with his thirst for danger.

And it’s not as if he spends all his time working – either flying or as a vet. He does holiday with the real love of his life, Sara, and they find relaxation ….. skiing.