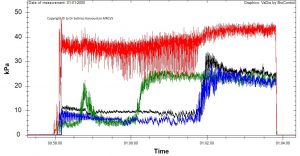 It’s all in a day’s work, but you’d expect a vet to be almost exclusively concerned with four legged clients.  Yet when it comes to mastitis in the dairy herd, the complexities are such that it’s as important to check out the milking parlour as it is the cow and her living conditions.

Dr Sotirios Karvountzis says that the solution is often counter intuitive.  The newer and more sophisticated the milking parlour, the less likely the farmer is to consider that it might be the source of the problem.

Yet in his experience, while newer machines tend to suffer fewer technical difficulties, when something does go wrong it can have a more dramatic effect.  The impact on a parlour with 24/30 units is clearly greater than where there are six or eight cows being milked.

Crucially there is frequently a false sense of security when the installation is new and it’s often not suspected when a mastitis outbreak occurs. Instead, human error is usually blamed.

Sotirios says: “It’s easier to blame the human factor than the machine, especially where there’s a heavy reliance on relief milkers.

“More often than not it’s the machine. The newer machines can give a false sense of security – as when a client with a cell count problem agreed to look at his ‘new’ second hand parlour.

“He felt it couldn’t be the parlour, though, because it was a fairly new installation. In my mind the system can become reconfigured very quickly.”

Dr Karvountzis stresses that it’s important to look at a mastitis problem from every aspect – and to think outside the box. He says that, according to AHDB research, the number of cows suffering from mastitis in the UK has decreased over 50 years.

And he explains AHDB figures show that resultant losses to the farmer have also increased. A severe case, leading to the loss of the cow, will amount to thousands of pounds lost.  Milder cases now account for a loss of £250, compared to £180 20 years ago.

This, he says, is why a dynamic test is so important. The statutory static test is of course compulsory each year, but the dynamic, which so much more accurately charts activity, is only used by 3 to 5% of farmers.

Sotirios adds: “By law all milk parlours need to have a static test carried out once a year, this is the equivalent of a vehicle MOT.

“Some cows are in full milk-flow, others are finishing milking or some have kicked the units off. During the dynamic test we use one of more vacuum trace recorder devices, which produce graphs similar to an ECG (electro-cardio-gram). This allows us to assess the health of the milk plant.”

Areas checked during the dynamic test include: udder preparation to ensure good milk flow as soon as the milk units are attached; milk liner fit for the size of the teat; milk flow away from the teat-end and overmilking.

Continued suction can damage the teat-end if the milk units remain on the teats for too long after milking has finished. Testing automatic cluster removal (ACRs), designed to cut the vacuum off and pull the milk units from the teats when the cow finishes milking has shown some discrepancies

These range from sometimes to very often applying vacuum after the cow has finished milking. An example of a recently tested 300 cow herd identified such a problem and when corrected mastitis disappeared ‘as if someone turned off the switch’.

Sotirios points out that the milking parlour is the workhorse of the modern dairy farm. It needs maintaining, whether it is a 40 year old abreast parlour or a modern comfort tandem, a one or speed-milking 50 point rotary or even the latest in space technology robot. 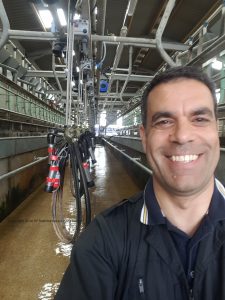 He says: “It’s the point the milking cow visits one, two, three or more times a day to deposit the milk she produces. It is important for the sake of udder health for it to be functioning properly, otherwise it may be damaging the cow’s teat.

“Inadequate milk plant vacuum levels and poor ability to flow milk away from the teat, will have a damaging effect on the cow’s udder. This damage can vary from the teat forming a “callus” or hyperkeratosis to full blown mastitis, and chronic high cell counts.

“Damaging the teat-end compromises one of the most important defences of the mammary gland against infection, with serious economic and welfare consequences.”

A proper dynamic test will involve Sotirios spending two or three hours in the parlour, sampling three or four units throughout the milking. Then, having spread a wide net, the preliminary results can be discussed with the farm team over breakfast or dinner.

Tracking the source also takes the vet outside the milking parlour. The whole environment needs to be checked, especially in cases where mastitis develops during the first 30 days of the lactation.

The best approach is always to be pro-active, to prevent the dry cow either acquiring infection or carrying it on from the previous lactation.  The environment should be checked as well as the milking parlour and, in consultation with your vet, the most appropriate dry cow therapy approach agreed.

For further information on this and more check our Udder Health page.