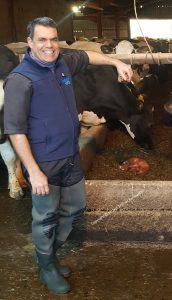 A DIY AI course run by a ‘super patient’ trainer and subsidised by Farming Connect is expected to pay dividends for a young West Wales dairy farming couple. Siriol Richards and Mark Harries are a couple in their early twenties, but each farm separately with their families.

They confess to being ‘very competitive’ but have to an extent synchronised their farming systems. They are both keen on improving the butterfat and protein content of their milk and run grass based systems, breeding for milk quality and longevity, with all year calving.

They feel that to rear the best possible heifers, they need the flexibility and control that doing their own AI brings. They can inseminate at precisely the right time, with the right bull for the cow or heifer’s requirements and don’t have to rely just on their own bull or wait for the inseminator to arrive. It also saves money.

Siriol says: “We can improve or genetics and it’s something useful to have. Not a lot of people can do AI and Mark and I both agree it’s such a valuable skill.

“Everything comes into it, but it’s mostly about timing. We use Breeder Tag System on our cows so we can see when she’s most likely to hold for the straw. 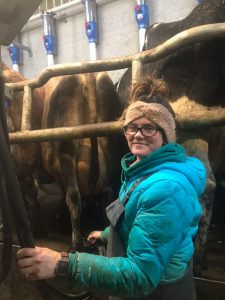 “So if she needs serving at 10 o’clock at night, we can serve her then but you wouldn’t be able to get someone out to do it.  We used sexed semen and sexed semen runs with a conception rate about 10-15% less than conventional semen, so being accurate with the timing of insemination is key and being that much more accurate with timing means we can have that much more success.”

The couple could see the need for acquiring DIY AI skills. Siriol runs 150 cross bred Jerseys with followers at Llangwm near Llandeilo while Mark has 100 British Friesians and followers at Cefnrhiwlas. They were though a little hesitant about the demands of the three day course, which is known to be challenging. Siriol’s father has the qualification, but health considerations mean he is less able than in the past.

It’s here that the quality of the training offered came into play. Siriol says their vet, Dr Sotirios Karvountzis, was fantastic and really patient! He had told them there was Farming Connect subsidised training available. He also warned them that the second day of the training would be the hardest, so we weren’t under any illusion that it was going to be easy! 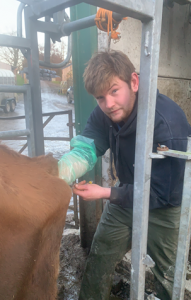 Siriol says: “We went at our own pace and if we had any questions then we could ask them straight away. I don’t think I’d have done it as well if it hadn’t been for Sotirios.

“On the second day, I got quite frustrated – it was really hard. He was so patient and just told me to calm down. He was always reassuring us that we’d be able to do it in the end. That helped a lot. He was always there for you, if you needed help he was there straight away.

“It’s difficult when you have hand in the cow can’t see anything. You don’t know what you’re doing – Sotirios can’t see either. So you have to listen to him, as he explains, he’s really patient and that’s great.”

Mark agrees: “We went at our own pace and if we had any questions then we could ask them straight away. I don’t think I’d have done it as well if it hadn’t been for Sotirios. It’s such a valuable skill to have.”

There was a little fun as well and the couple are ‘quite competitive’ and so when they were serving a cow that was on heat, Sotirios suggested they each chose a different bull. They have to wait now to see who was successful when the cow calves in the Autumn!

The rewards will be getting the cows back in calf more quickly, hopefully achieving a calving index of 365. Calving on the same date each year, means all the cows would remain within that index giving them the optimum time to recover from calving without going over and losing money.

There will also be a bonus in terms of breeding replacements for optimum milk quality. Siriol and Mark each began serving cows in earnest straight after the course. They’re confident, but a little nervous, that the cows will be in calf.