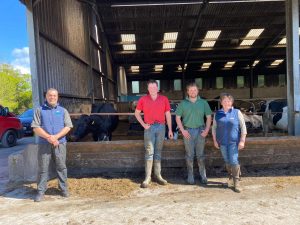 Getting the feed right is, naturally, key to a dairy cow’s health, welfare and productivity. And when charged with devising a herd health plan, I feel it’s important to take a holistic approach to deal with underperformance.

It’s for this reason that I forensically examine nutrition as part of a pro-active health care package. Malaise and disease are often related to poor elements in nutrition: the nutritional quality; the way the ration is devised and/or delivered.

The nutritional appraisals I carry out combine observation with internationally acclaimed software analysis. It means that, if all things are equal, I can predict to within two litres how much milk a cow will produce in a day.

The old saying is that there are three (sometimes more) diets provided to the cows: the one on paper, the one the farmer mixes and the one the cows end up eating. It is important to find why there is a difference between these three.

They involve visiting the dairy herd on a fortnightly, or perhaps a monthly, basis. I visit the herd prior to a pre-arranged health and fertility visit and begin by walking among the group of cows, looking for signs such as body condition score. I want to see how much fat she carries on her back, along her tail base and so on.

Secondly, I look at how full or how empty the left flank of the cow looks. Rumen fill is an indicator of how much food the cow has been eating in the past 12 to 24 hours and I want to see if she is maximising feed intake, particularly dry matter.

Very often, high performing dairy cows aren’t properly digesting their food and if the rumen is too low, below 150 litres, may appear unwell. The rumen is an important part of the cow and, with a 700 kilo cow, the rumen can vary in size between 150 to 200 litres.

Some of the many cow signals I monitor include looking for the amount of space available for them to feed: the type of feed barrier, the level of lameness in the group and other signs. The design of some feed barriers can stop cows eating properly. It might have a horizontal bar frame at the top above the cow or, if it’s too low, the cow can’t stretch her head far enough out to reach the food.

Then there is the number of times the feed is pushed out in front of them. The ideal number of times to push the feed the cows have scattered is anything between six and 12 times a day. Increasing the push up rate can boost milk yields by between 3 and 5 %. All that, while bearing in mind that feeding off the floor, as opposed to a feed trough, increases the risk of cows contracting Tuberculosis.

Concerns about tuberculosis mean more and more herds are not providing the mix (the silage and the other straights mixed together) off the floor. The worry is that vermin, including badgers, can access and contaminate it with tuberculosis. Instead, the cows feed through a raised feed trough. So, recommending the best method to provide the feed to the cows, is a balancing act. 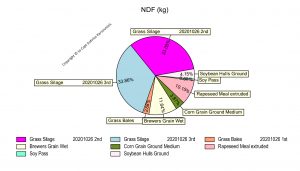 The dry matter of the grass silage, one of the components of the mix, is important. The mix usually consists of grass silage, maybe whole crop, maybe maize silage, the various straights such as wheat, soya, rapeseed, brewers grains, barley and minerals. In some cases, for the transition cows, dry and due to calve, the DCAD diet might be an option because it prevents the onset of metabolic disease such as milk fever, staggers and ketosis.

I also check the various feed components, beginning by putting a silage sample in a feed dryer, to check dry matter levels when devising a ration. The composition of the ration can then be adjusted accordingly.

The analysis of dry matter indicates the amount of water present and a wetter feed will provide fewer nutrients per unit to the cow, so affecting productivity. A feed that is too dry might may take longer to be digested. It might also be rocket fuel and the cow sometimes cannot handle it properly.

So I test the dry matter at least every fortnight and put the information into my nutritional software, then I analyse it and adjust accordingly the amount of silage that goes into the mix. The final nutritional variable is the concentrate.

By law, there is an accepted tolerance between what is declared on the ticket and what is actually contained in the consignment. The vast majority of times, this difference is negligible, but on rare occasions this might be noticeable. 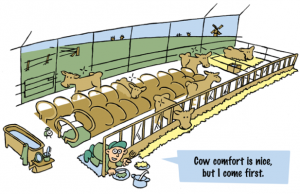 Although the science of nutrient digestion in cattle is complex, it would seem obvious that a batch of cake with declared crude protein value of 18% and another of 17.2% would result in different outcomes. This margin means there may be a need to independently assess the composition of that batch. Once a month, or maybe once a quarter, I send samples to laboratories, my preferred one is in the US. Laboratory analysis gives me an idea of whether what the label says reflects what is ‘in the tin’.

Finally, I put all this information into the nutritional software, based on the CNCPS (Cornell Net Carbohydrate and Protein System) model. It’s all about evidence-based work, devised by Cornell University in New York State.

Their research developed this program and has been quoted more than 7,000 times in peer reviewed articles. The software is widely used in a variety of farming systems across the globe, from indoor all year-round to New Zealand type extensive grazing.

It’s an accepted way of calculating how the rumen and the cow’s gut breaks down various particles, carbohydrates and proteins.  We now know that not all proteins break down at the same speed. We’ve got various groups of protein, pools, digested at different rates: from fast speed to intermediate to slow and, finally, the indigestible pool that can’t be utilised.

Similarly with carbohydrates, there are three: fast, slow and indigestible (ie lignin). So, the speed of digestion will vary, according to the ingredients in the cake or the silage. The information provides a better way to predict how the cows will behave in terms of health and disease.

It’s all evidence based. Provided all my observations of the cows, the environment and the feed content are correct – and that’s a critical if – then the predictions of the model will be within two kgs of milk per cow per day.

So, if the program says a cow will give 40 litres per day, then she will give anything between 38 and 42 litres. A great result!

Find out more about our Cow Signals Course here.