Mastitis is an inflammation of the udder. It’s a fairly regularly occurring disease in dairy cows. Chronic Mastitis is when the condition recurs.

The udder is like the tires of our car. When we move from A to B the tires get worn. A milking cow’s main purpose in life is to produce milk through the udder. So that udder is getting challenged twice, three times, four times a day.

Chronic mastitis is a case of mastitis that has been treated several times, but doesn’t seem to go away, that could be for a number of reasons.

There could be a minute damage to the teat end. Each time it flares up, we manage to treat it, but the damage then lets some more bugs in, or it could be because the bugs that we are dealing with are notoriously difficult to be eradicated by the treatment. So for example, Staphylococcus Aureus and also Streptococcus Uberis are classic bugs that have the ability in different mechanisms to evade the body’s defences and evade any treatments.

Beyond the discomfort of the cow, mastitis represents a problem for milk yields. Mastitis changes the composition and the texture of the milk. We can’t drink milk with mastitis because it tastes different. It might also contain bacteria, although most of them are killed by pasteurization. 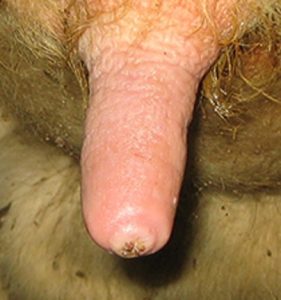 In addition to this, if you’ve got a lot of cows with chronic mastitis in the herd, then milk goes in the bulk tank.

And if it’s more than X number in the herd, it will elevate. It will make the bulk tank milk that you’re selling less attractive to the people you’re selling it to. So they will penalize you for it.

The Symptoms of Chronic Mastitis

There are several strong signs of mastitis. Firstly there could be inflammation or swelling.

There could be pain in the quarter or the whole of the udder. Sometimes the symptoms move away from regional  areas and can affect the whole body.

Finally there might be temperature, the animal may lack their appetite or could be visibly sick. Nine times out of 10, the symptoms are located in the udder.

The only way to find that type of mastitis is to carry out high white blood cell tests. There are two main types, one is called the Californian Mastitis Test where you mix some milk with equal amounts of a detergent like fair liquid. The other test is a milk recording test where you take a sample from each quarter and you send them to a lab to be analysed.

Treatment for mastitis is straightforward and usually involves a course of antibiotics that will be recommended by your vet.

There’s a wider discussion that you can have with your vet or your consultant about how to prevent mastitis from happening again? Most of this comes down to maintaining good Udder Health

The main areas to consider are the environment. If the cows are lying down in dirty beds, they’re likely to pick up mastitis that will sooner or later become chronic mastitis.

It’s possible that the cows diet is not addressing their nutritional needs, their immunity will be affected amongst other things, and they will start picking up mastitis.

If there’s generalized disease in the herd and you’re not vaccinating against it, it will end up with the same effect.

But finally, and most importantly, it’s to do with what’s happening in the milk parlour. If the milking routine is not up to scratch, it will increase the chances of cows getting infected during milking, but more importantly, the milking machine can cause damage to the teat end, in sever cases the cow may not be able to recover from it. So she then has repeated bouts of mastitis, hence chronic mastitis.

So part of the discussion of addressing chronic mastitis goes through the wider environment that the cows are kept in, not just what antibiotic we’re going to use. And the milking plan is a fundamental aspect to prevent that type of mastitis.

Get in touch to find out about our udder health services

We use cookies to ensure that we give you the best experience on our website. If you continue to use this site you agree to their use and the Privacy Policy of this website.OkRead more